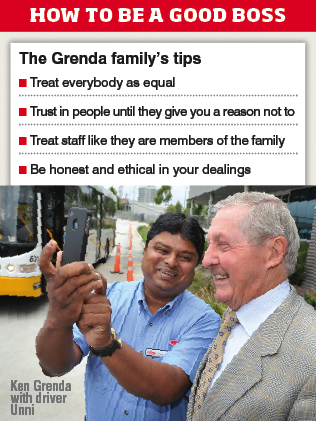 I love when a boss gets it that his most precious assets are his employees.

Ken Grenda is on such boss. His tips on how to be a great boss should be compulsory reading for any aspiring CEO

A MELBOURNE boss has stunned his staff by giving them a staggering $15 million gift -the ultimate pay-off for their hard work and loyalty.

Workers at bus company Grenda couldn’t believe their good fortune when surprise bonuses averaging $8500 were paid into their accounts – with some staff receiving as much as $30,000.

“A business is only as good as its people, and our people are fantastic,” he said. “This is to recognise that. We have had people here who are second generation, and one fellow in the same job for 52 years.

Grenda bus driver Heath, with the company for just 10 months, received less than the average bonus, but was dumbfounded by his windfall of around $850.

“Some employees were calling their banks assuming it was an error,” he said. “Good bosses are hard to find and Ken was a very good boss, one of a kind.”