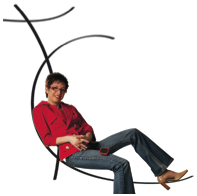 Have you ever entertained the idea of becoming an entrepreneur but felt hemmed in by your present job commitments? Or in your quest for financial liberty considered learning a new skill but felt it would require years of night school before you could make your break for freedom, fresh air, sunshine and the wild blue yonder?

What if (with some fine tuning) you could make good financial use of what you already know; some skill or talent that you use daily but have not realized until now it could be your ticket out from being a wage slave.

My irrepressible guest Sally Curtis is one such person who used her innate people skills to great success. Her talent for building rapport stems from a genuine interest and curiosity about other people. When Sally integrated that with bringing together the right people at the right time to get the right result, her company Twisted Connector was born.

Put simply she has positioned herself as the catalyst for generating opportunities and  business deals between  people that otherwise would be missed. Hear how Sally Curtis has managed to monetize what comes naturally to her and that is to enjoy the company of people she meets. Nice work!